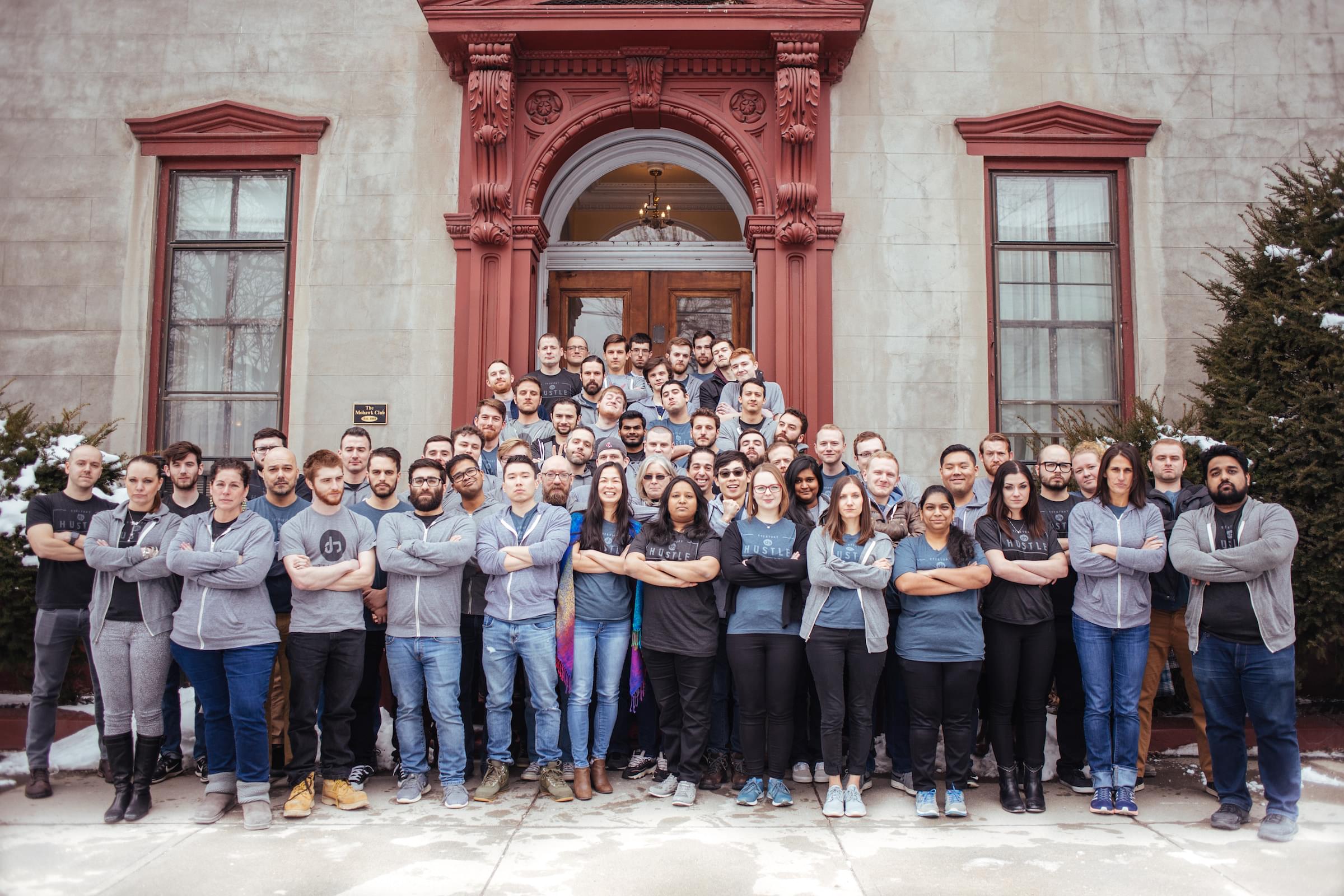 The Janel Group team is shown earlier this year during their War Week team-building exercise.

The Janel Group team is shown earlier this year during their War Week team-building exercise.

SCHENECTADY — A new apprenticeship program is giving people with more talent than experience a pathway to the growing software engineering field.

The initiative couples the workforce development efforts of Albany Can Code with the academic setting of SUNY Schenectady County Community College in partnership with private industry, as the Center for Economic Growth provides administrative support through regulatory matters.

Apprentices pay nothing for classroom time at SUNY Schenectady and draw pay for the thousand-plus hours they’ll need to spend working at their sponsoring employer over the course of their year-long apprenticeship. Twelve-week training sessions with Albany Can Code — one is required, more are optional — run $1,600 each, but can be as little as $0 for income-eligible students.

Albany Can Code CEO Annmarie Lanesey said industry involvement has been critical to the success of the nonprofit since she founded it in 2016.

Not only are these companies helpful in placing newly trained graduates, they are critical in developing the curriculum that trains the future software developers.

Albany Can Code is more agile and flexible than academic training programs because it doesn’t need a series of approvals for a curriculum change, she said. Through quarterly employer meetings, it knows exactly what skills are in demand in the Capital Region and changes the courses accordingly.

“One of the reasons we were successful initially is we have a good employer network,” Lanesey said.

The next step in building Albany Can Code was to find people in the workforce who had the aptitude but not the training to do software development work. She came to appreciate this category of worker when she hired two people for Greane Tree Technology, her Troy software development firm. One had a four-year degree and one had no college degree. The one who hadn’t attended college was better at the job.

“A lightbulb went on and I realized there were people all around the community who had the aptitude,” Lanesey recalled.

Nearly 150 people have completed training through Albany Can Code. Most are ready for entry-level jobs upon graduation, which is a bit of a disconnect because many of the jobs Capital Region employers have the most difficulty filling are mid- and upper-level jobs, Lanesey said. An apprenticeship can bridge that gap.

“This is more about bringing in new blood to our talent pool,” he said.

He’s bringing on two apprentices in July, one to work in operations, the other in sales and service. As junior software engineers, they’ll be paid $20 to $30 an hour and have a wide array of career paths open to them as they progress through their year of classroom and on-the-job education.

MVP generates huge amounts of data as its 1,700 employees manage payment for health care for 700,000 members by tens of thousands of providers. It is the job of the information technology staff to manage and analyze that data.

If MVP needs something unique, or needs to build a competitive advantage, it will create software from scratch, but the wide majority of applications it uses are commercial software products customized in-house.

“We’re excited to participate in this,” Della Villa said. “I think it opens the doors to a number of opportunities.”

Software developer the Jahnel Group, based in Schenectady’s Stockade neighborhood, has consistently been among the region’s fast-growing small companies, starting with four people and now employing 70.

CEO Darrin Jahnel said “I feel like we could grow even faster” if not for a shortage of qualified applicants. There’s no shortage of applicants — the company will interview 300 to 400 people a year and hire 10 to 12. But Jahnel said the limiting factor is lack of talent rather than incompatibility with the Jahnel Group’s culture.

“One of the keys for our model has been to really dip into our local colleges,” he said — bring in students as interns, develop their talent and sell them on the company culture so they’ll stay with Jahnel Group after graduation.

“I feel like we’ve been kind of doing this apprenticeship program for years on our own, in a way,” Jahnel said. “When we heard about this program, we said, ‘Wow.’”

The company does have a young workforce, but it’s not exclusively young.

“Some of our great success stories are people who came from different paths,” Jahnel said, mentioning a 30-something who’d previously worked in a Catholic book store and another whose prior job was filling growlers for a beer distributor.

It comes down to three things, he said:

“One, are you smart enough? This is really hard work we do.

“Two, are you hungry? Are you ready to work hard, learn and grow?

“Three, are you a fit with our culture?”

Vice President for Workforce Development and Community Education Sean Maguire said SUNY Schenectady is a designated lead college in SUNY’s apprenticeship initiative, and focuses on health care, but realized what it was doing with health care training could be adapted to information technology.

“The experience that we have here is that there are opportunities out there now,” he said.

Participants in the software development apprenticeship program do not need to be enrolled SUNY Schenectady students and there is no charge for SUNY instruction. The cost — less than $1,000 each thanks to a SUNY system grant — is borne by employers.

The college is looking for additional business partners for the program. These will be employers willing to take on job candidates who have the critical traits — thinking on their feet and solving problems — even if they have specific gaps in their skill set, Maguire said.

Laying the groundwork for all this is the Center for Economic Growth, the regional economic development organization. CEG will be the participating companies’ group sponsor with the state Department of Labor, which regulates apprenticeships. It will manage the required reporting and organize each apprentice’s outside coursework, a task that can be prohibitively time-consuming for small and midsized firms.

In 2018, there were 6,504 software developers in the eight-county Capital Region. There were 584 job openings, more than any other STEM occupation. Annual software developer wages range from $59,000 (entry-level) to $96,000 (experienced).

“The Capital Region’s software development industry is already thriving, and this new apprenticeship program will help it do so even more,” said CEG President and CEO Andrew Kennedy.